“This is an excellent interview with valuable insight based on a paper in an upcoming issue of Nature Climate Change.”(Climate Change Blog: read more…)

The paper is part of a volume, Quantitative Methods in Paleobiology, sponsored by The Paleontological Society. Full details are available here. The volume is also available for sale. Purchase one and support the Society!

p(extinction) when number of prey species=10

The CEG model asserts that food web structure plays a role in extinction. The intricate patterns of relationships among species in a community distribute the effects of changes in one species to others in its community. Therefore, while the ultimate causes of increased extinction in an interval of time may be abiotic, and might affect only some species directly, the effects could be felt more broadly.

Let a perturbation of magnitude

be equal to the number of species removed randomly from the network. The probability that a species

set. This is determined from a hypergeometric distribution, where we can first ask: Given an in-degree of

, what is the probability that

of them will be lost?

where there are S-1 other species in the network and

The formula can be re-stated interestingly as

where trophic breadth is the number of species consumed by species

, out of a pool of potential prey (species richness). For example, in a network of 10 species,

, and the probability of extinction increases as

(see figure). Species with more resources are thus more resistant to topological secondary extinction. This is the same as saying that the more trophically generalized a species, the greater its resistance to extinction.

This explains in part the suggestion that food webs of greater connectance (C) are more resistant to topological secondary extinction (Dunne et al., 2002). Overall food web or network resistance to this type of extinction has been termed structural robustness (Dunne and Williams, 2009). Food web connectance does not increase, however, because of uniform increases in the in-degrees of all species in the network, but increases instead because of the presence of highly linked species. The skewed, long-tailed in-link distributions discussed earlier indicate the non-uniformity of in-degrees within real food webs. The above formula for extinction shows that $latex p(e_{i}^{x})

is of greater in-degree than

. This will also be the case if the species on which

preys are more resistant to extinction, even if

. The presence of generalist consumers therefore enhances robustness both because of their own greater resistance, and the resistance which they confer upon their consumers.

Let’s begin the description of an ensemble space by recognizing that it is a probability space of all the species-level networks (SLNs) possible given a specific metanetwork. We will adopt a set of formal definitions of the space, namely as a probability space (S, F, P). The set S is the complete sample space of the metanetwork whose topology is U, F is the set of sets for which real-world SLNs exist (see below) and P is the probability of an element in F, that is, P(SLN). F is often taken to be the power set of S, or the set of all sets, but as shown below, many of those sets in S would contain SLNs that cannot exist in the real world.

of the adjacency matrix, being one if a link exists, and zero otherwise. Then the maximum number of prey species (maximum in-degree) available to any species in G4, denoted

equal zero. This can be generalized to a metanetwork of any complexity as

, and every one of these possibilities or predatory states could be combined with every other state of the remaining species in G4, the maximum number of possible networks is simply

This formula overestimates |S| because prey species in a guild are treated neutrally from a consumer’s point of view. Neutral is used here in the sense of ecological neutrality; the species are indistinguishable from each other on the basis of trophic properties. In other words, the above calculation of |S| does not specify which prey species are linked to when the predatory states of different predators are combined. Therefore, many of the combinations counted in the calculation will be isomorphic food webs, and they would not have unique ecological properties.

fossils in the first drawer,

in the second, and so on. The fossils (links) are not distinct, and we do not care specifically to which drawer (prey species and guild) they are assigned. The trick is to first state the problem as: How many combinations of n fossils can I get if I have m drawers to select from? Or, how many combinations of r links can I get if there are g guilds to select from? We recognize that we are in fact permuting n fossils plus m-1 partitions among the drawers, yielding

Therefore in our sample food web, if a species in G4 has three in-links, then the problem is

The calculation of |S| can now be refined, where the topologies obtained for a particular in-degree are combined with those of other species, rather than simply combining the number of in-degrees possible. We proceed in several steps. First, determine the maximum number of in-links possible for a species in guild

. Next, determine the number of in-link topologies possible for each in-degree (1 to

), given the set of prey guilds,

is the number of topologies possible for species

, which is a member of guild

is the in-degree of

is the number of guilds upon which

preys (sum of the

row of the adjacency matrix). Note that this is calculated and summed over all possible in-degree values, one to

. Following from the earlier calculation of |S|, the number of topological combinations among species in

. We therefore re-calculate |S| as

This calculation is still an overestimate, however, because the number of links between a consumer species and any prey guild is unconstrained. It represents all elements in the power set of S. In terms of the museum fossils analogy, we have assumed that the cabinet drawers are of infinite capacity (sadly, a curatorial fantasy). A more accurate measure of |S| is possible if we limit drawer capacity to some finite number of fossils, thereby limiting ourselves to the set F of real possibilities. The food web situation is more complicated because different prey guilds will most likely have different species-richnesses, and hence differing capacities for links. The situations would be analogous if drawers in the collection were of different sizes, indeed a curatorial nightmare! The solution would be to modify the above formula for

, using only topologies where the number of links from a prey guild to

appropriately among the prey guilds so that this condition is met. The set of all such partitions that match the constraints of prey guild species-richnesses can be determined, but the solution is not straightforward and requires application of a partition function and partition theory. Both those topics are, unfortunately, beyond the scope of the current post. Therefore, the given calculation of |S| remains an overestimate at this point. It is possible, however, to determine the probability of any particular SLN being found in a metanetwork’s ensemble. I’ll follow this up in the next post. 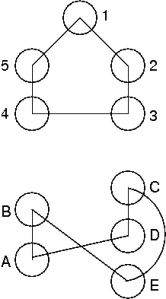 Given a set of species V, let us construct a food web by assigning interactions (links) randomly to species (nodes), but with equal probability p. Species will therefore have equal numbers of interactions on average. The probability that a species can be found with r links, and therefore be of degree r, is given by the binomial probability

If we assume that the number of species is far greater than the number of links per species, that is |V|>>r, then the above formula may be re-written as

,
where z is the average number of links per species, or the coordination number of the graph. The probability density function P(r) is a Poisson distribution, with mean z. Such graphs are known as Erdös-Renyi graphs and possess many interesting properties. While Erdös-Renyi random graphs rarely describe real-world food webs (that is, species in a community do not have on average the same number of interactions; see below), they prove useful in demonstrating certain concepts.

The link distribution P(r) describes, for a set of nodes V, an entire ensemble of graphs. For example, the graphs illustrated in Figure 2A are both realizations of graphs with p = 0.2, and |E| = 5. No two realizations of graphs based on the same link distributions need be the same in detail, but they will have the same properties on average. The entire set of graphs based on a given set of parameters is the ensemble, and ensemble properties are usually written in angled brackets as <X>. The ensemble number of links per node in our two graphs is therefore <2>. It is also interesting to note that the two graphs are in fact identical if one ignores the labeling of the nodes. The vertex arrangements differ, but the graphs themselves are identical, bearing exactly the same information. Identical graphs are said to be isomorphic. Recognizing graph isomorphism allows us to distinguish between the properties of a graph, and any particular depiction of that graph, whether by illustration or adjacency matrix. Determination, however, of whether two finite graph depictions are isomorphic becomes increasingly difficult as the size (|V| and |E|) of the graph increases. In fact, no formulaic solution exists to the problem, it is believed to be NP-hard or NP-complete, and it is usually tackled with algorithmic computational approaches of varying efficiencies. Are the two graphs in Figure 2B isomorphic? The answer is yes, but I will leave that demonstration as an exercise for the reader! (The figure is borrowed from Wikipedia’s entry on isomorphic graphs)

Given any species level topology

represents edges or links, and

where the right product is the probability of any species

The number of species-level networks that can be derived from a metanetwork depends upon permutations of all possible combinations of link topologies of species in the community, and is generally an astronomical number for even a modest number of species and guilds. The network with the greatest probability, or maximum likelihood of occurrence, is one where the probabilities in the formula above are maximized. This can be approximated if one considers that the probability of

being linked to any

is equal, regardless of the in-degree of

One can therefore consider the probability of linking to any

These are simply maximum likelihood estimates of the metanetwork link probabilities.

The in-links of each species are assigned randomly to species in other guilds for which a metanetwork in-link exists, i.e. those other guilds comprise potential prey of the species, and

where the species belongs to guild

The resulting network may be represented as a

is the total number of species in the community. Binary entries

is prey to species

equal the in-degree of species

The probability of a species

or the binary pattern of the row

and a species in guild

is equal to the fraction of the diversity of

prey that is represented by the species richness of

then the probability of

is the number of

links to species in guild

is the species richness of

is the total number of prey potentially available to

This prevents the inclusion of zero probabilities. Finally, the overall probability of the network is calculated as