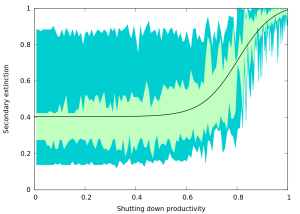 We have a new paper on paleo-food web dynamics in the Journal of Vertebrate Paleontology! The paper is one in a collection of 13 (and 27 authors), all focused on the “Vertebrate and Climatic Evolution in the Triassic Rift Basins of Tanzania and Zambia”. The collection covers work done in the Luangwa and Ruhuhu Basins of Zambia and Tanzania, surveying the vertebrates who lived there during the Middle Triassic, approximately 245 million years ago (mya). This is a very interesting period in the Earth’s history, being only a few million years after the devastating end Permian mass extinction (251 mya). They are also very interesting places, capturing some of our earliest evidence of the rise of the reptilian groups which would go on to dominate the terrestrial environment for the next 179 million years. The evidence includes Teleocrater, one of the earliest members of the evolutionary group that includes dinosaurs and modern birds.

Our paper, “Comparative Ecological Dynamics Of Permian-Triassic Communities From The Karoo, Luangwa And Ruhuhu Basins Of Southern Africa” is exactly that, a comparison of the ecological communities of southern Africa before, during and after the mass extinction. Most of our knowledge of how the terrestrial world was affected by, and recovered from the mass extinction comes for extensive work on the excellent fossil record in the Karoo Basin of South Africa, but that leaves us wondering how applicable that knowledge is to the rest of the world. We therefore set out to discover how similar or varied the ecosystems were over this large region, comparing both the functional structures (what were the ecological roles and ecosystem functions) and modeling ecological dynamics across the relevant times and spaces of southern Africa. We discovered that during the late Permian, before the extinction, the three regions (South Africa, Tanzania, Zambia) were very similar. In the years leading up to the extinction, however, communities in South Africa were changing, becoming more robust to disturbances, but the change seemed slower to happen further to the north. The record becomes silent during the mass extinction, and for millions of years afterward, but when it does pick up again in the Middle Triassic of Tanzania, the communities in South Africa and Tanzania are quite distinct in their composition. The ecosystem in South Africa was dominated by amphibians and ancient relatives of ours, whereas to the north we see the earliest evidence of the coming Age of Reptiles. Yet, and this is where modeling can become so cool, the two systems seemed to function quite similarly. We believe that this a result of how the regions recovered from the mass extinction. Evolutionarily, they took divergent paths, but the organization of new ecosystems under the conditions which prevailed after the mass extinction lead to two different sets of evolutionary players, in two different geographic regions, playing the same ecological game. As we say in the paper, “This implies that ecological recovery of the communities in both areas proceeded in a similar way, despite the different identities of the taxa involved, corroborating our hypothesis that there are taxon-independent norms of community assembly.”

And finally, this work would not have been possible without the generous support of the United States National Science Foundation’s Earth Life Transitions program.