We’ve spent some time augmenting our REEF-based data in light of the uneven sampling intensities in the Caymans, Cuba and Jamaica. Major additional sources include GBIF and Fishbase. We now have both occurrence records and trophic data for 192 vertebrate species, with Cuba being the richest island (177 species), followed by Jamaica (163 species) and the Caymans (159 species). The trend coincides with reef area of the three systems, but we must be careful to not over-interpret these somewhat noisy data. So what have we learned so far? 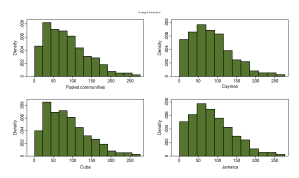 Comparisons of the trophic in-degree distributions, or the number of prey species/resources of the vertebrate species reinforces our earlier result showing that these are modal, right-skewed and long-tailed distributions. They differ from “conventional” food web distributions which are almost never modal, with attention being focused on the long tail. Here, we see that on average, species in all three communities have a similar number of incoming links. There are more specialized species, but specialists are never most common. Also note the difference between Cuba and the other two systems. Density is essentially shifted toward the right tail, i.e. generalists, in the Caymans and Jamaica. What does this mean for the species? Pairwise comparisons of the in-degrees of species that are found in two systems indicate that species in Cuba (CU) have significantly more prey resources, in-links, than they do in the Caymans (CY) or Jamaica (JA) (Wilcoxon test of equality; CY vs. CU, n=153, p<0.0001; JA vs. CU, n=142,p<0.0001; JA vs. CY, n-142, p-0.5653; Bonferroni corrections applied). When broken down by the three major foraging habitats, seagrass beds, reefs, and both seagrass beds and reefs, the significance holds up for the latter two habitats. The meaning for populations in these systems is a bit difficult to predict, but it would at least imply a greater susceptibility to stochastic or exploitative perturbations of the Cayman and Jamaican communities.

Some of you might have picked up on an apparent paradox: the Cuban distribution has more specialists, yet species in the Caymans and Jamaica have fewer resources. There’s no paradox really; the difference lies in species that do not occur in two or more systems. I’ll show in the next post that not only are species in the spatially smaller communities of lesser degree, but that in at least one of those communities, there is a dearth of specialists.